My Real Children by Jo Walton 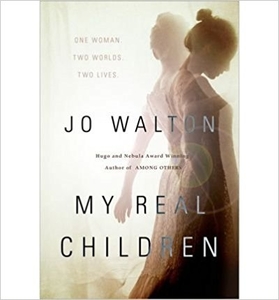 Jo Walton’s new novel, My Real Children, is an intriguing piece of speculative fiction filled with pages of adventure. Patricia is near the end of her life, safely tucked away in a nursing home, all her children grown. Soon, however, Patricia finds herself slipping between two lives; is she Pat, or is she Trish? Does she have three children or four? She remembers the bomb that killed President Kennedy, but she also remembers Kennedy declining to run again after the nuclear exchange that destroyed Miami. But which life is real? A wonderful jaunt through two worlds similar to our own yet entirely different, Walton’s novel takes us through each of Patricia’s lives and the choices that change everything.

Though the concept behind Walton’s novel is initially intriguing, the execution becomes rather dull. Walton has built these two lives so intricately and in such detail that she is sure to have enough material for several novels, but because of the amount of information presented the story tends to be rather slow. We learn exactly what happens, year by year, in each of her two lives, but there is very little in the way of character growth or emotional depth.

While the events are exciting, readers may be disappointed in the lack of feeling. Overall it is a well-written novel, but not a terribly exciting one.