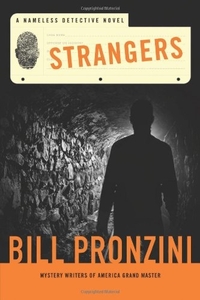 A call for help from his old lover Cheryl sends the intrepid Nameless Detective on a journey from his home office in San Francisco to a small mining town in eastern Nevada. Cheryl’s nineteen-year-old son Cody has been accused of rape, though she is sure he is innocent. As he begins his investigation, Nameless encounters suspicion and hostility from the locals and stonewalling from local law enforcement. Before long, he has been lied to, threatened, and shot at. Drug deals, burglaries, and theft, along with a cast of vindictive and unhelpful residents complicate his attempts to solve the case.

Pronzini takes us on an entertaining journey through small-town desert life. His characters are vibrant and realistic, like you might know them from real life. Pronzini has been writing his Nameless series for more than thirty-five years, and the character has matured with age. Pronzini’s clear writing style puts the reader right in the middle of the of the action to create a compelling and satisfying read.