I definitely started out as a writer. Three years ago, I became a writer trying to also teach. And now, somehow, I’ve become a teacher trying to write. Teaching writing and loving writing are extremely hard to do simultaneously. I set a goal to do both, to be both, better. I’d like to say I’ve conquered that goal, but honestly, it’s a daily struggle.

It’s funny to reflect upon the various writing strategies I learned as a student versus the writing strategies I now teach to my 7th graders. As a writer, I never used any of it. None, zero, zip. As a teacher, I was appalled when students did that exact thing. How dare they ignore my tools and resources! There’s actually so much I learned when I forced my writer-self to sit down and utilize my teacher-self’s writing advice.

Below, I’ve outlined the three most helpful writing strategies that I always blew off as a student and as a writer. Now that I’ve been teaching these for a few years (and seeing the amazing results in my students’ work), I am using them myself.

I know, I know, this word might make you roll your eyes. But trust me. Your writing will benefit from a little pre-writing. I’m not saying you need to plan out an entire outline with roman numerals and the whole enchilada (although if that’s your thing, go for it). After they learn and try out a few different methods, I allow my students to brainstorm however they please. They can simply jot down a list of events (I love lists). However, most of them choose to create some sort of visual aid. You may think you’re above a fluffy bubble map…you are not! Type “writing graphic organizer” into Google and prepare yourself.

This is a strategy that I actually just learned this previous year of teaching. Obviously, I’ve heard of trying out new beginnings for your story—mostly, in my Creative Writing program in undergrad, we tested out flip-flopping our stories. And of course, we’ve all tried changing up the point of view. But this strategy is much more specific and aimed at creating a clear, attention-grabbing intro.

-Action Lead. Self-explanatory—jump into the scene mid-action. Be careful of showing and not telling though…this can be tough when writing about strong actions like fighting or running or kissing. Don’t focus on that forest burning down, focus on that leaf falling slowly and turning to ash before it hits the ground.

-Dialogue Lead. Also self-explanatory—but make sure the dialogue is a hook. Writers tend to use dialogue as a crutch (I’m definitely guilty of this) instead of purposeful sentences that move the story along just as much as the narrative does.

-Reaction Lead. Start your story with a character’s thoughts or feelings. Captivate the reader until they’re dying to know what the character is thinking about or why they’re feeling that way.

Even if you think you know exactly how you want to begin your story, try this method. You’ll surprise yourself—my students are always shocked! “Miss, I really thought I wanted to start with action but read how good my reaction lead is!” is a common exclamation.

If your novel is anything like mine, you have quite a few names to keep track of. I’ll never know how George R. R. Martin does it. I’m sure he has some sort of anthology, but I’ll settle for character maps. When my students write short stories, I have them map out everything they can think of about their characters. Not just your typical, “Name? Age? Loved ones? Setting? Job? Appearance?” but also, “Beliefs? Attitudes? Favorites? Dislikes? Enemies? Quirks? Conflicts?” and everything in between. I don’t go this far into detail when I write, but I’ve definitely found it helpful to keep an ongoing list. You don’t want to be THAT guy who made a boo-boo and repeated a name or fudged an age or confused a reader in any way. You want to stay true to the character 100% and keeping track can be hard. You NEED some sort of organizational tool.

I truly, truly wish I had utilized these strategies more with my first novel. The truth is, since I finished writing it before I started teaching, none of these things seemed important. By the time I realized how much my writing would benefit, it was too late. All I could do was tweak here and there. I’m still proud of my debut novel, don’t get me wrong! But I know that my second one will be much better, thanks to my teacher-self controlling my writer-self (most of the time, anyway). 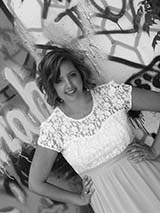 Alysha Kaye was born in San Marcos, TX, where she also received her BA in Creative Writing from Texas State University. She worked in marketing for a brief and terrible cubicle-soul-sucking time until she was accepted into Teach for America and promptly moved to Oahu. She taught 7th grade English in Aiea for two years and also received her Masters in Education from University of Hawaii. She now teaches in Austin, TX and tries to squeeze in as much writing as possible between lesson planning. She dreamt about The Waiting Room once, and offhandedly wrote her boyfriend a love poem about waiting for him after death. Somehow, that became a novel.

Synopsis of The Waiting Room:

Jude and Nina are the epitome of that whole raw, unflinching love thing that most people are jealous of. That is, until Jude dies and wakes up in The Waiting Room, surrounded by other souls who are all waiting to pass over into their next life. But unlike those souls, Jude’s name is never called by the mysterious “receptionist”. He waits, watching Nina out of giant windows. He’s waiting for her. What is this place? How long will he wait? And what will happen when and if Nina does join him? The Waiting Room is a story of not just love, but of faith, predestination, and philosophy, friendship and self-actualization, of waiting.