The Bees by Lauline Paull 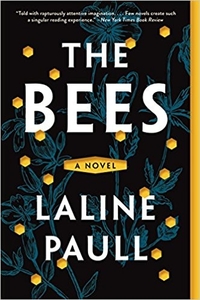 Although Flora 717 is a worker bee from the lowest caste in her hive, she quickly sets herself apart from all others by her audacity, strength and versatility. Her kin specialize in the sanitation chores of the hive, but Flora is special. Her skills are first tested in the nursery and later, the ever so curious Flora, convinces her sisters to let her try out new chores in the hive.

As one of the most spectacular foragers in the hive, Flora travels far and wide for pollen and nectar, encountering dangers in insects and birds called the myriad. The hive celebrates Flora for her contributions and even allows her access to their Queen, but she soon discovers that there is something stronger than her love for the hive – her love for her own egg.

We learn about the many functions of the hive, the creative ways that bees communicate and the profound loyalty that every bee has for their sisters, their hive, and specially their Queen. As Flora develops into a wise, kind and fearless worker bee in the course of a year, the reader will also develop a new sense of respect and fondness for the remarkable little workers.