The Immortal Crown: An Age of X Novel by Richelle Mead 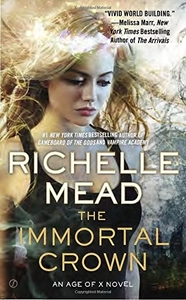 The Immortal Crown by Richelle Meade is the second installment in her Age of X series. The story follows the main characters Justin March, a religious investigator for the government, and his terrifying bodyguard Mae Koskinen as they set out for a diplomatic mission to Arcadia, a conservative and deeply misogynistic country to the south of their lands. Once there, Justin uncovers a plot to take down RUNA by disabling their computer system and creating widespread chaos and panic. Mae has her own mission: find her niece, who was taken to Arcadia to become a teenaged bride. Driven by their duty, Justin and Mae follow their paths with the hope that they will both survive.

This book is an outstanding effort by the author. She has created a wonderful world full of contradictions and conflicts. The main characters are well written, complex and loyal to each other. The supporting characters and storyline – primarily that of Justin’s charge Tessa – is equally as interesting and relevant to the overall plot. It is not necessary to read the first book before this one, as the gaps are filled in for the reader. Fans of fantasy and myth will love The Immortal Crown.