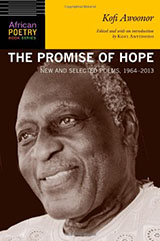 Kofi Awoonor was a diplomat, scholar and poet. He was born in Ghana in 1935 and was among those killed in the Nairobi mall terrorist attack in Kenya on September 21, 2013. His poetry is tender, intimate, and at times indignant. His poems are about places he has been, as in the poems from his Latin American & Caribbean Notebook, and about people he has known (and lost), as in the poignant “In Memoriam” for his friend and fellow poet Neville Dawes. His language is clear and lyrical, and often highly politically charged, as in “Song of Abuse” and “Revolution.”

“Do not dress me yet
lift me not
unto the mound before the mourners.
I have still to meet the morning dew
a poem to write
a field to hoe
a lover to touch
and some consoling to do.”

The Promise of Hope is a collection of unpublished and selected poems from Awoonor’s 50 years of writing. It is organized in a reverse chronological order, with Awoonor’s latest poems coming first. The Promise of Hope is the first book in The African Poetry Book Series edited by Kwame Dawes, another poet and close friend of Awoonor. The series’ mission is to bring the literature of Africa and the African experience to a wider reading audience. Those who claim to dislike or not understand poetry will find Awoonor to be understandable and personal.  For those who are interested in world literature in general, and African literature in particular, this is an invaluable collection.