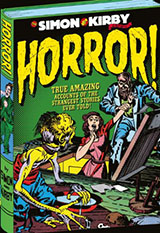 Joe Simon and Jack Kirby are two of the titans of American comics. Joe Simon served as Marvel’s first editor and hired Stan Lee. Kirby created such icons as Captain America, The Fantastic Four, the Hulk, the X-Men, and the New Gods. The two together have over 150 years of experience in the comics industry, and their creations continue to inspire and captivate readers today.  The two worked together in the 1950’s at Prize Comics to create Black Magic, a comic that centered on the horror genre. Unlike the majority of comics and pulps in the field, Black Magic’s pages were not drenched in blood and gore, nor were there any “gotcha” moments. The comic centered on atmosphere and mood, inciting more subtle fears and digging into the reader’s psyche. These stories are more The Twilight Zone and less Tales from the Crypt.

“This is the one we’ve all been waiting for. Ever since Joe Simon launched the Simon and Kirby Library, readers have been clamoring for the horror stories. In particular, they’ve been demanding the masterpieces from the Prize Comics issues of Black Magic–some of the most sought after examples of the team’s unparalleled 1950’s collaboration. Tales that have never been collected in a single, lavishly restored collection.

HORROR! collects a number of issues from Black Magic found nowhere else, as well as the short-lived The Strange World of Dreams. This collection is a fantastic addition to the library for both horror and Kirby fans.