The Son by Jo Nesbo 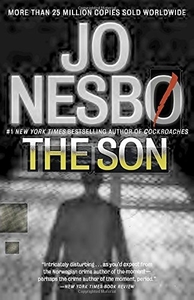 Sonny Lofthus has been in jail for twelve years, doing time for the crimes of other people. In return, he lives a comfortably spartan life and is supplied with the highest quality heroin. When Sonny finally learns the truth about the death of his father, however, he makes a daring escape in order to exact revenge against those who besmirched his father’s name and who have made him a scapegoat for their crimes. Meanwhile Chief Inspector Simon Kefas, an old friend of Sonny’s father, draws closer to connecting the recent killings to an old betrayal.

“The boy nodded, stuck his left hand into the sports bag and pulled something out. He aimed it at her while he took a small step to the left. Agnete had never experienced anything like it, not in real life. But there was nothing wrong with her eyesight, never had been, all the family had perfect sight. So she didn’t doubt her eyes for one moment, just gasped for air and automatically retreated one step to the open door behind her.”

The Son is an elegant crime novel, full of suspense, intrigue, and fascinating characters. The complex tapestry of corruption that ties so many of the characters together keeps the pages turning long into the night. Jo Nesbo is known for his Harry Hole crime novels, and The Son is the perfect book for mystery enthusiasts looking for a one-shot masterpiece.