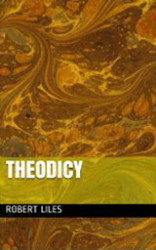 What an unusual and fascinating read! Theodicy by Robert Liles is a fantasy, skillfully and delightfully written as an imitation of Homer’s Iliad and Odyssey. Such an artistic device is completely explicable, reasonable and logical since this modern epic poem follows Homer’s stories. The events are simply transported into our time and set on the American continent. In Liles’ story, the Olympian gods are still fighting each other, using ordinary mortal people in their battles and interferring with their lives. The tale starts in the small, insignificant village of Atenas, in a desert northwest of Mexico where people worship Athena. Her eternal rival, Ares God of War, who has sought revenge since the Trojan War, decides that the time for his vengeance has come. His followers, members of a mighty drug cartel, set the village on fire. Only Eliseo, a young, poor farmer and a few other villagers have escaped Ares’ wrath. Seeking safety and following an oracle’s advice, they illegally cross the United States border.

“There is but one path before you in life, indeed,
But your free will determines it. That single path in life
Is a series of forks, turns and roadblocks.”

During Eliseo’s dangerous odyssey, he combats an Olympian god’s treachery and endures hostile treatment by both mythological creatures and people. Surprisingly, the hexametric verse is effortless to read. It moves gracefully, and the thoughts and events are easy to follow. The picture in this allegorical narrative is dark but not without hope, and readers may join Eliseo in his epiphany.