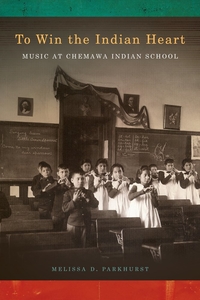 The title is a little misleading, because the book is about far more than music. It is a history of Chemawa Indian School, one of a number of Indian boarding schools established in 1879 by the Department of the Interior.
The author shows how the pendulum, and the nature of the school itself, has swung from the notion of forcing Native Americans to assimilate, to the notion that cultures can acculturate to one another. As was the case with church-funded, boarding schools, originally students were discouraged from speaking their own language, or pursuing tribal customs.

For many years, music was part of the curriculum at the school. However, that music was western music, not tribal music. There were choral groups, bands, and even a string quartet. Helped by the dedication of a handful of committed teachers, some of the students went on to enjoy careers as professional musicians. Today the music program is not part of the curriculum, but student clubs perform with non-classical music.

One of the oddities of Chemawa, was that students came not only from the northwest, but from the Navajo Reservation, and from various parts of Alaska. The resulting interactions, musical and otherwise, enriched the lives of the students. The school is still in operation today, but like more ordinary schools, has seen its music program diminished. The music at Chemawa today is much less organized, but through after school clubs, the students continue to share their musical heritages. The author shows that this has resulted in music programs that are designed more for those who already sing or play, than to teach students who are beginners.

In addition to more formal musical organizations, the author discusses pow wow music and Indian rock bands, as well as dance. The reader comes away with an understanding of how important a tool music was to minimize homesickness and alienation on the part of young people who were many miles, geographically and spiritually, from their homes.