Visions of Infinity: The Great Mathematical Problems by Ian Stewart 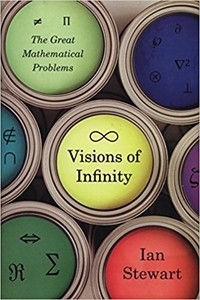 A “great problem,” says Ian Stewart, is great not because we find the answer but because our efforts to solve it create new ideas and new mathematics along the way. In Visions of Infinity Stewart traces the attempts to solve some of the most challenging mathematical problems the human mind has posed and tells of the exiting discoveries these efforts have produced. He tackles those everyone knows – Fermat’s last theorem, the four-color problem – but also explores problems linking so-called “pure” mathematics and areas from fluid dynamics to quantum physics.

Stewart valiantly attempts to foreground the human struggle to solve these deep mathematical questions, some of which remain unsolved. He presents each basic problem in simple terms and maintains an engaging, conversational tone throughout. The sticking point is that the technical vocabulary, even to understand many of these great problems – Riemann’s Zeta function, say – will land the general reader in deep waters, indeed. However, math aficionados will find this a well-written and exciting book that will bring them up-to-date on some of the frontier research into problems that has vexed mathematicians for decades, even centuries.