Welcome, Foolish Mortals: the Life and Voices of Paul Frees 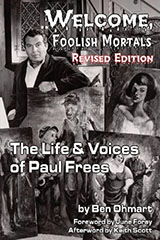 One of the Great Voices of the Past

Ben Ohmart’s Welcome, Foolish Mortals is obviously a work of devotion. Ohmart has dedicated extensive time and research to recreating the life and career of Paul Frees, one the most prolific voice actors in the mid 20th century. Frees himself gave relatively few interviews, was a private man and did not keep close track of his work, particularly in his early years in radio, so some parts of this documentary are thin. Ohmart has worked closely with Frees’ surviving family, however, and one of the best parts about this book are the large number of photographs, showing not only Frees but also many of the great names in 20th century voice acting. This book will appeal to many people who remember the cartoons of this era, or even the radio shows of the 40s and 50s. Even with an interest in mid-century popular culture, I was constantly thinking, “Wait, that was him, too?” Boris Badenov, Professor Ludwig von Drake, and the Ghost Host at the Haunted Mansion are just a few of Frees’ literally thousands of credits. The biography is largely complimentary, so readers looking for dirt or gossip might be disappointed, but most readers will marvel at the work ethic and the sheer number of voices created by one of the world’s great voice artists.