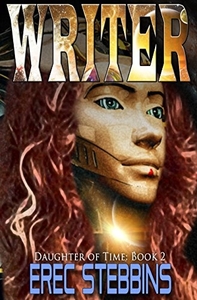 Why must sci-fi book covers be so thoroughly disappointing? The often clichéd cover art, predictable fonts and images can easily turn non-sci-fi-minded readers off before even the synopsis is perused. Often, this is not a great loss. But sometimes, every once in a while, a truly impressive book will emerge from under uninspiring cover art. It will burst forth and shock the reader with its complex storyline, intriguing characters, smart and well-crafted prose, and leave a person wishing for better art direction for the author. Such is the case with Erec Stebbins’ wonderfully written sci-fi epic Writer, the second installation of this Daughter of Time series.

The novel centers on Nitin Ratava, a soldier who is almost myopically focused on Ambra Dawn, the Daughter of Time after whom the series is named. Having saved humanity from certain destruction 200 years ago by virtue of powers resulting from a massive, disfiguring brain tumor that has left her physically blind, Ambra Dawn is Nitin’s focus, perhaps even his destiny. Coming to him in dreams, and existing throughout his life as an obsession that worries his parents, Ambra Dawn is more to Nitin than the mere savior of humanity (as if that weren’t enough).

But when new, dark forces clone Ambra in an attempt to overthrow her reign and plunge New Earth into chaos and destruction, Nitin and his team of both faithful and skeptical soldiers must rush to the forefront and work directly with Ambra and her advisors, including the bizarrely-shaped alien Xix, in order to save New Earth from a fate much worse than that which befell Earth. But how can this be accomplished when one does not really know what one is up against?

While Writer is most certainly a work of science fiction, with battle scenes, alien technology and advanced warfare galore, Stebbins is a bona fide writer himself (there, of course, being a massive difference between writing and actually being a writer), his prose eloquent and engaging, his characters fully fleshed out and more complex than is often seen in novels released by smaller publishers. Stebbins’ craft and skill make what in lesser hands could have been a typically mediocre sci-fi epic into a work of literary fiction that transcends its genre—and its cover art. Read this novel. Immediately.