A Tale of Two Soldiers: The Unexpected Friendship between a WWII American Jewish Sniper and a German Military Pilot by Max Gendelman 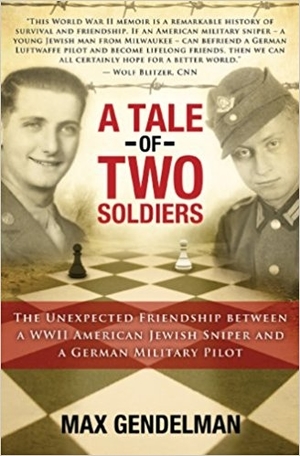 World War II was full of many atrocities, however, there were also astounding moments of bravery and kindness in the midst of so much horror. Max Gendelman tells one such story in his memoir, A Tale of Two Soldiers. A Jewish sniper caught as a prisoner of war, Max was able to survive because of his knowledge about the German language, and functioned as a translator between the captives and the German officers. While living in fear of the Germans learning of his Jewish heritage, Max strikes up an unlikely friendship with Karl, a conscripted German pilot who is recovering from his recent injuries. Bonding over games of chess, Max and Karl agree that as the Allied forces continue to advance, their chances of survival grow less likely. With the sound of artillery fire growing closer, Max and Karl make a daring escape and head for Allied territory.

“Bombs fell everywhere, with emphasis on the police and army barracks. We were able to see a direct hit on the station, which we had just vacated. Our luck was certainly holding but for how much longer?”

In his Afterword, Max states that he wrote A Tale of Two Soldiers for his children, so that they could fully understand the story of his escape and lifelong friendship with Karl. While the book does deal with many of Max’s harrowing experiences in the war, the emphasis is on the connection he forged with Karl. Some readers may notice that the book rambles a bit, delving into seemingly unconnected memories or segueing at random, which makes it read a bit more like a diary than a memoir. While this may annoy some readers, others will find it charming. A Tale of Two Soldiers is a personal look into the powerful and unexpected lifelong bonds people can form, even in the midst of war.