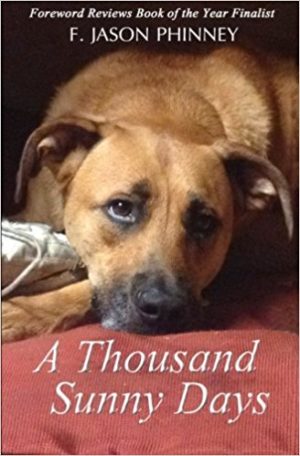 “Happiness is a warm puppy.” Charles M. Schulz wrote this and it rings quite true in author F. Jason Phinney’s book, A Thousand Sunny Days. When things go to pot for Phinney, he subscribes to this belief wholeheartedly. Readers meet Phinney, a man whose life is in shambles after a failed marriage. He is not sure where to turn until he opens his door to a string of wandering dogs just trying to survive. Phinney could have chosen to become an alcoholic or an addict after the blow to his ego, but instead he became a champion for pets.

While taking care of this group of dogs, he is able to really examine himself. He realizes that there is always another side to most situations and maybe there was more than just one person to blame in the collapse of his marriage. I won’t go into specifics about what made the marriage collapse. That is for you to read and think about. During the time they live together, they help each other move on and become a healthy influence for the other.

Throughout the book, Phinney throws a variety of personalities into a contained environment which makes each a better person and a better dog. Pet therapy can be very beneficial in helping one heal and move on, as is true in this case. Readers might think that because there was so much going on, it would be hard to heal. But Phinney needed the stimulation to be able to move on. Phinney needed to focus on someone other than himself….and that included a houseful of puppies.