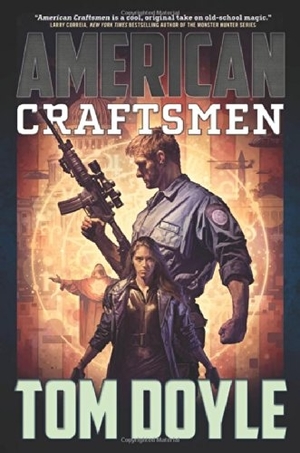 Captain Dale Morton is a craftsman – a soldier in the employ of the US military under a special branch that oversees magicians and the use of magic. After being cursed by a fellow mage in a black-ops mission that turned FUBAR, Dale’s trust in the military is shaken and he retires to track down whoever was responsible for setting him up. However, Dale is part of the Morton family – a family with a very dark history – making his superiors less likely to believe anything Dale says, even when he learns of a conspiracy embedded within the craftsmen organization that goes all the way up.

“But I can’t trust my own government,” I said.
“No. No, you can’t,” she said. “Even if they’re not actively against you. At best, the brass fears disclosure of the craft militant, and they’d rather sacrifice you and a lot of craftsmen than risk it.”
“And at worst?” I asked.
“At worst,” she said, “something’s rotten on the inside.

American Craftsmen is a unique fusing of magic, mystery, and military literature. The book begins quickly with a violent and intense action scene, but it then slows down to delve deeper into some background information. The history surrounding the different craftsmen families is fascinating and somewhat complicated. While some readers may feel that although the book does pick up again with some action down the road, it never reclaims the intensity of that first scene. The magic used in the book is also rather nebulous and may be difficult for readers to grasp exactly what the rules are. Tom Doyle’s American Craftsmen is an enjoyable debut, and great for urban fantasy fans looking for a military twist on the genre.