Beginning with the Word: Modern Literature and the Question of Belief by Roger Lundin 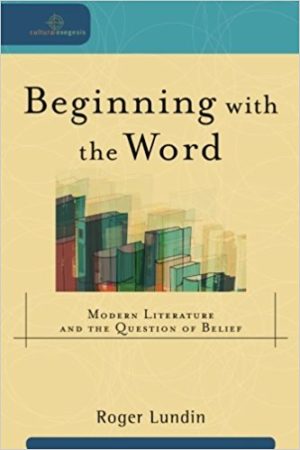 Sometimes an effort to muddle genre is admirable, bringing together readers who might not otherwise share a like-mindedness; other times it succeeds only in narrowing one’s audience to a very select few. In Beginning with the Word, Roger Lundin, unfortunately, has landed on the latter. As both an English professor and a professor of Christian faith and learning, Lundin attempts to draw together theologians, literary critics, and cultural critics – voices that typically do not intermingle, he argues – and initially his intentions are well-founded: “The reason for this silence cannot be that the partners are so woefully mismatched that a genuine dialogue between the theorists and theologians would be unthinkable. It is not as though Ferdinand de Saussure, Richard Rorty, and Frank Kermode are tilling some lofty plateaus of the intellect, while Karl Barth, Hans Urs von Balthasar, and John Paul II toil away out of sight on barren landscape in the valleys far below.” And so, with chapters like “From Signs to Stories” and “Dwelling in Possibility,” Lundin engages such theorists as Richard Rorty and Jean-Francois Lyotard alongside such theologians as C. S. Lewis and Dietrich Bonhoeffer, all the while adding his own autobiographical sketches as a parent, a student, a man of faith, and a professor.

“Like most children, I had come to depend on the stories my parents told me about my infancy and our family’s life before I came along. Through their stories, I acquired my first sense of where I had come from, who I was, and what I might become. As I grew older, works of literature began to build on the foundation and within the framework my parents had established. Poems and novels rearranged the rooms, flooding some with light and deepening others with shadows, and in my experiences of reading, I began to sense that there might be a pattern to my life and a meaning hidden somewhere within it.”

The downside in blending these genres, however, is that Lundin effectively dumbs down the critics and intellectualizes the personal stories, finishing with a book that essentially is an erudite walk through one man’s effort to bring scholarly theorists down to a more manageable, peaceable level. For those interested in a smart personal discussion, it works; for those interested in more than a select summation of critical and theological thought, it is not enough.