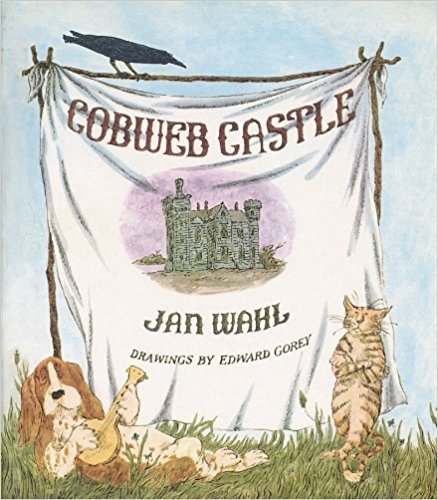 Like most of us, Flemming Flinders spends a bit of each day dreaming about the fantastic things he reads about in his favorite books. Will he ever have an adventure like the characters do in fairy tales? One day Flemming decides to lock up the grocery store that he owns, say goodbye to his cat Nisse, and set out to find some fame and fortune. After meeting a wart-nosed woman named Drukamella (probably a witch!) and conversing with a talking crow (a talking crow!), Flemming starts to believe he has stumbled into a fairy tale. And when he spies a beautiful maiden in the upper window of spooky Cobweb Castle and a shadowy figure lurking in the bushes, Flemming is sure he is the star of his very own adventure. But as we know, things aren’t always as they seem. Cobweb Castle, written by Jan Wahl and illustrated by Edward Gorey, is the story of one man’s search for the wonderful in a perfectly ordinary world.

Collectors of Gorey’s work will definitely want to add this title to their bookshelves, especially since it was last printed in 1968 and is one of the artist’s original works in color. Known for crafting humorous and distinctive characters, Gorey comes through once again in Cobweb Castle. His illustrations breathe life into Wahl’s words, leaving readers with a fantastic tale about reality. Wahl and Gorey’s collaboration provides kids with a gentle lesson about never giving up on your dreams, even when your hopes seem dashed. There is always another adventure around the corner!