Contested Frontiers in the Syria-Lebanon-Israel Region: Cartography, Sovereignty, and Conflict by Asher Kaufman 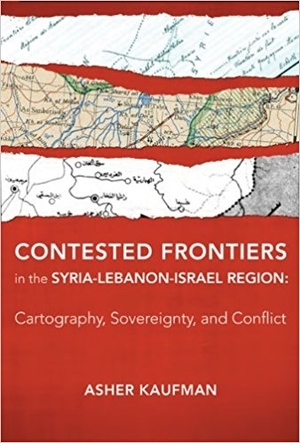 In sharing the conclusions of his compelling study, Asher Kaufman traces the evolution of the tri-border region that, over the course of successive generations, has drawn Israel, Palestine, Lebanon and Syria into a claustrophobic embrace. The boundaries have been transformed three times since the mid-twentieth century with the almost simultaneous birth of Israel and the end of the French and British colonial mandates. The relationship between inhabitants of the contested frontier of his title, in categories suggested by Oscar Martinez when he described the Mexican US border region, has ranged from belligerent, co-existent, interdependent and in the past, integrated in a manner somewhat akin to the European Union.

Moving beyond the village level and focusing on geographic landforms, the introductory section on cartography demonstrates how modern day maps from the nineteenth century to the present are “the prerequisite for pursuing territorial control” and claims, cynically, that “innocent” maps are nonexistent.

The core of all development and conflict, the essential quest for fresh water in a parched region, has drawn Kaufman‘s fascination with the 100 square kilometers that define the tri-border region. The historic, geographic and sociological elements, though described with academic precision, nonetheless stimulate our own awareness and imagination.