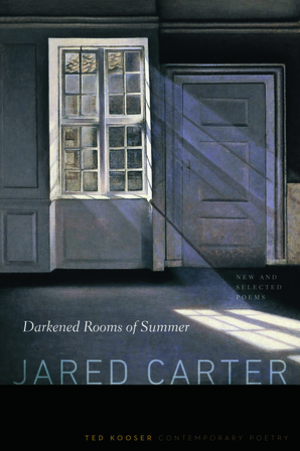 Jared Carter’s poetry is pure, home-spun Americana, full of small-town people and places in the tradition of Edgar Lee Masters and Sherwood Anderson. For instance the poem “The Undertaker,” is about, well, an undertaker – one who hires men from the local tavern to help him dig up the bodies in the cemetery in order to be relocated to higher ground before a reservoir is built. “The Measuring” is another macabre but beautiful piece, with a very deft and subtle rhyme scheme, about the measuring of a corpse before it is placed in the ground. But most of Carter’s best work is at the beginning of the book, from his first two collections, Work, For The Night Is Coming and After The Rain.

“The purpose of poetry is to tell us about life.”

Les Barricades Mysterieuses is a collection of villanelles, a tough form that Carter executes well, but to include a whole section of them feels a bit tedious. Additionally the selections from his latest collection, A Dance in the Street, are flat and prosaic, even boring. The new, previously unpublished poems at the end of the collection are all written in the same form: twelve lines divided into three quatrains with the same rhyme-scheme, with no variations.

This collection starts strong, but falters. It was commissioned by Ted Kooser as the first in his Contemporary Poetry series, which Kooser hopes to use to bring little-read and, according to him, under-appreciated poets to a wider reading audience. Carter does deserve this despite the collection’s weaknesses because, as Ted Kooser states in the introduction, “You’ll find many poems in this book that you can push under the noses of people who say they don’t like poetry, and they’ll discover that they do.”