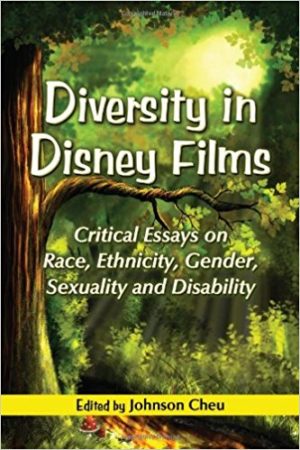 Diversity in Disney Films: Critical Essays on Race, Ethnicity, Gender, Sexuality and Disability is an excellent scholarly book of essays edited by Johnson Cheu of Michigan State University. The book is divided up into four sections: “Beyond the Fairest: Essays on Race and Ethnicity,” “Traditions and Transformations: Essays on Gender and Sexuality,” “Of Beasts and Innocents: Essays on Disability,” and “Up and Out: Essays on Reimaginings and New Visions.”

In 2008 Cheu was researching for a class when he first realized the lack (and lack of diversity) of scholarly essays in his university and elsewhere on Disney films. Therefore, Diversity in Disney Films has been edited to include articles with fresh critiques on a wide range of Disney films. And what a range that is! Essay topics aside, the films seen in the essays span the years 1946 (Song of the South) to 2010 (Up). Sarah E. Turner’s Blackness, Bayous and Gumbo: Encoding and Decoding Race in a Colorblind World tackles how Disney handled blackness in The Princess and the Frog. Amanda Putnam’s Mean Ladies: Transgendered Villains in Disney Films employs a personal tone while retaining a sharp and perceptive voice about the characterization of Disney villains. The essay Dopey’s Legacy: Stereotypical Portrayals of Intellectual Disability in the Classic Animated Films by Karen Schwartz, Zana Marie Lutfiyya and Nancy Hansen, critiques character portrayals of people with disabilities, and how these portrayals influence the public. Dennis Tyler takes a critical tone on the imagination in his essay, Is Disney Avant-Garde? A Comparative Analysis of Alice in Wonderland (1951) and Jan Svankmajer’s Alice (1989).

Cheu has done an excellent job of putting together a book with scholarly articles focusing on how Disney has handled diversity in the past, and how they are currently approaching diversity in a pluralistic and global society. As Amanda Putnam points out, Disney films have only recently been considered influential enough to merit content analysis. Cheu has edited a thought-provoking book chock-full of analyses for those who are interested in close critiques of Disney films.