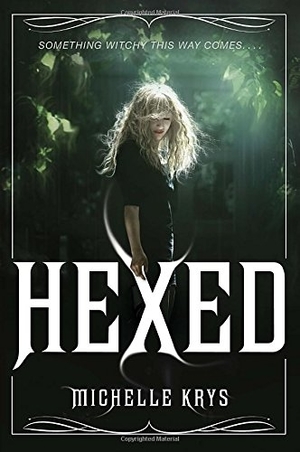 As a member of the cheerleading squad, the most popular girl in school’s best friend, and hottest guy’s girlfriend, high school has been a breeze for Indigo Blackwood. Things begin to change when Indigo sees a boy die right in front of her, and then a prized bible is stolen from her mother’s occult shop. As a wave of bizarre memory loss sweeps the city, Indigo is accosted by a pair of powerful men who claim that she is a witch and has somehow managed to cast a spell on the stolen bible preventing them from opening it. If she breaks the spell on the bible every witch the world over will be in danger, but with her mother caught in the crossfire Indigo doesn’t have much of a choice.

“So, I have a zero to fifty percent chance is what you’re telling me?”

Hexed is pretty standard as far as fantasy YA novels go; the characters have distinct voices, but their emotional attachments to one another are not terribly believable. Paige is a particularly unrealistic character because of how quickly she allows Indigo to become her best friend, despite the many years of mistreatment at Indigo’s hands. The main conflict of the story – witches vs. sorcerers – isn’t particularly well explained, leading to some head scratching about why exactly these two groups of people, who have almost identical abilities, are fighting in the first place. Readers looking for a YA story revolving around witches may enjoy this book, but others may be driven away by the rampant stereotypes that plague both the characters and plot.