I Shall Be Gone by Richard Ferrara 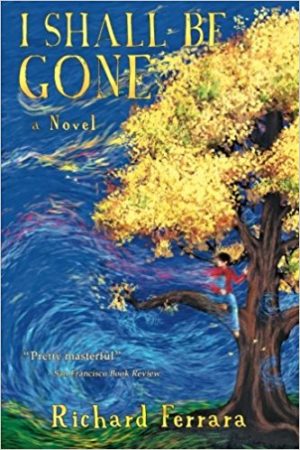 Jobeus has it rough. He has lost his entire family and is now being shipped from foster home to foster home. That’s rough for any child, especially one as strong-willed and unique as Jobeus. Things aren’t quite normal for him. He has an active imagination—or are they visions?—and a strong will. He also has a lot of anger, directed at no one and everyone, and has his own way of coping with his grief and the loss he has endured and what it has done to his life.

Jobeus has just moved into the Hawses’ foster home and is not quite sure what to make of it. Are they nice? Are they cruel? Are they abrasively pushy Christians like the last family he was stuck with? He doesn’t know whether or not to hate them and whether or not they will hate him. His mind goes from one extreme to the other at record speeds. At least they have a great collection of books that once belonged to their deceased son. Jobeus combs through that collection and, in finding a book he loves, expands his horizons. His dreams/visions becoming ever more vivid and which blurs the line between fiction and reality.

With the story of Jobeus and the novel I Shall Be Gone, author Richard Ferrara has created a world within a troubled boy’s mind that is sure to stay with his readers. Jobeus is a complex, interesting, and sympathetic character. His rich internal world (as well as his often witty and relatable anecdotes) is by turns hilarious and frustrating.

Ferrara’s characters are all complex, comical in their own way, and described in the exaggerated, no-nonsense manner of an angry adolescent like Jobeus, our perhaps less-than-reliable narrator. While I Shall Be Gone is a long, dense novel, Ferrara’s masterful and varied prose makes the novel move more quickly than one would expect, and keeps the reader hanging around for more.

I Shall Be Gone is nothing if not a novel to seek out, and Richard Ferrara is an author to pay attention to. You’ll be hearing more about him very soon.