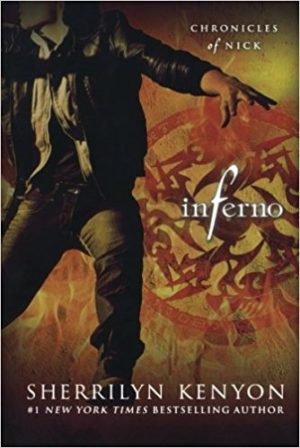 If you haven’t read any of the Chronicles of Nick yet, hang your head in shame. Now go buy Infinity. Now read the other two. Now read Inferno. Nick Gautier has never lived a normal teen life. He’s the wing man for the undead, Dark-Hunters, one in particular who will eventually be his fate. He also has an overprotective mom and every unimaginable being, creature, demon, beast, god, goddess, shifter, anything else known to man crossing his path. Nicks’s problem is his powers hover between good and evil, and knowing what his future holds only makes his current decisions more daunting. As with all Kenyon books, you get plenty of time with characters from several other series mingled together, including Ash and Simi, more of Caleb, and of course, Adarian, whose clock is ticking.

“You’re blue, son. Practically glowing it, like some Mayan sacrifice, waiting to get your heart ripped out. What has you down so low?”

Whether or not you have read any Kenyon books, there’s no better time to pick one up. You’ll find her characters are easily brought to life, the way she weaves them through different series is captivating, and how she manages to keep it all straight is absolutely mindblowing! So stop what you’re doing and read this book. Nick would want you to!