Reel Change: The Changing Nature of Hollywood, Hollywood Movies, and the People Who Go To See Them by Bill Mesce, Jr. 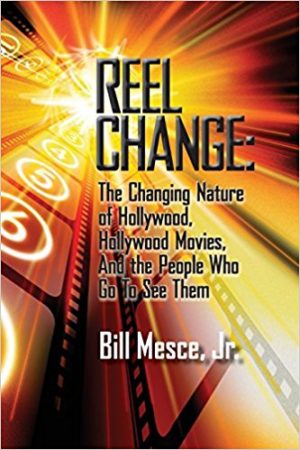 Reel Change by Bill Mesce, Jr. is a fascinating book from which a serious fan of film or film criticism will be challenged not to learn something new. The book covers the last 60 years of filmography by collecting the author’s blog posts, which have a personal ring to them but which show a deep knowledge of film. One will find interesting explorations of familiar genres like the western, film noir, comic book films and more. One might find the book both long and short. The book is dense and contains a great deal of information about what transpires on and behind the screen. There are many interesting anecdotes, trivia and fascinating personal insights into the film world.

“There’s an undeniable poignancy to their plight; last of the Old West outlaw bandits, they are like grasping fish floundering from one puddle to the another at the bottom of a drying pond as their world evaporates around them.”

Mesce contributes to the blog Sound on Sight and is currently an adjunct professor who teaches film appreciation. His generalities and criticism make for a fascinating read, and his engaging language and verbal pyrotechnics are sure to keep the reader interested through a wide range of stories.