Science and Religion: Reconciling the Conflicts by David M. Barker 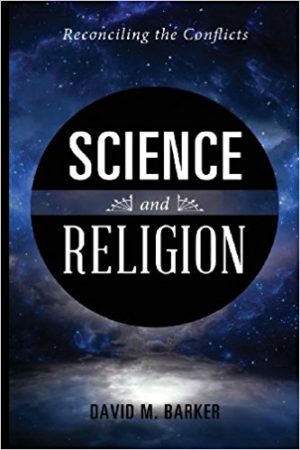 This is an interesting book, because it can be read two ways: In one, it is a thorough critique of the ways in which scientists are in error when their findings conflict with Biblical truths. In the other, it is an education on the ways in which science can be made to appear in error. Since science demands that they may be wrong, the author’s work is half done already.

Science and Religion starts with three-and-a-half pages of endorsements from a high school student and people with professional degrees such as lawyers, educators and engineers, and a PhD in fuel technology. There are none from biologists, archeologists, geologists, dendrochronologists (tree ring counters), physicists, or any of those the author takes to task. The book draws extensively on the ideas of Hugh Nibley, a scholar with close ties to the LDS Church and Melvin Cook, PhD who, interestingly, helped develop the Bazooka during World War II and the ammonium nitrate explosive still in use by industry and (talk about unintended consequences) Timothy McVeigh.

The author lists seven main disagreements between mainstream scientists and creation scientists; they include, of course, Noah’s flood, the sun remaining still and the lifespans of the ancients. These can be roughly attributed to disagreements about the scientific theory of Uniformatarianism versus the idea of Catastrophism necessary to the creationist’s view of the Earth’s history. Uniformatarianism holds that the processes that formed the features of the earth, like the Grand Canyon or the continents for instance, have been happening at roughly the same rate for millions of years. The creationists, who believe the earth has been around for a maximum of twelve thousand years, hold that catastrophes like the Great Flood, suddenly changed the face of the entire earth in about a year’s time. Plate tectonics – the theory that the continents are floating on the Earth’s mantle of molten rock – is replaced by the speculation that a comet passing close to the earth deposited large quantities of water in addition to the flood waters, and caused the continents to suddenly break apart from gravitational forces and move into their current configuration quickly, thus providing the force necessary to form features such as mountains.

The book is well done, with copious footnotes, appendices, an index and a bibliography, however, the contents of the book are a little more problematic. I noticed pretty much throughout the entire book that phrases such as, “Some say,” or “ who can say which technique yields the most accurate results?” appear more than once. A hint: Their guys say these things. The thing that struck me hardest is the persistent theory of the author that the entire scientific community is a bunch of slipshod, self-aggrandizing charlatans who will do anything to deny Biblical inerrancy, but I think that shoe may actually be on the other foot.