Tarzan in the City of Gold by Burne Hogarth & Don Garden 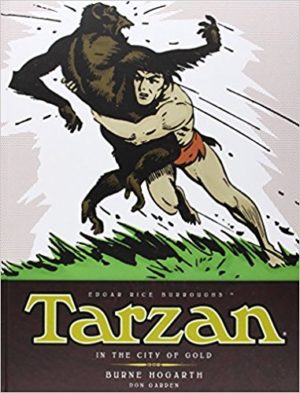 A pop culture phenomenon, Tarzan has amused and entertained since Edgar Rice Burroughs’s first book was published in 1912. The novel’s popularity spawned many more novels, movies, and comic strips. In Tarzan in the City of Gold, Titan Books has collected the entire comic run illustrated by artist Burne Hogarth. The book displays the illustrations in the full-page, full-color spreads as they were originally published. It also includes an essay at the beginning introducing Burne Hogarth, and providing a brief history of Tarzan.

Tarzan in the City of Gold is well-designed and colorful collection of comics; perfect for readers searching for the nostalgia of following Tarzan’s adventures in the newspaper. Thanks to the introductory essay, this book also functions well as an introduction for new initiates to the fandom. Because the book is reproducing comics originally printed in the newspaper, many of the images are slightly blurry, and colors overlap into strange areas due to the printing processes of the time. Despite this, and partly due to the large size of the individual images and the bold line art, the comics remain easy to follow. This book is a great collection for Burne Hogarth enthusiasts, and a good introduction into one of the many iterations of Tarzan.