The Age of Radiance: The Epic Rise and Dramatic Fall of the Atomic Era by Craig Nelson 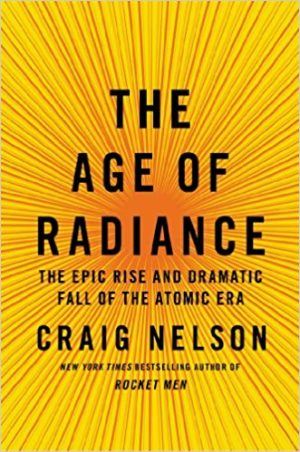 The Age of Radiance from Manhattan author Craig Nelson takes on a worrisome subject, trying to de-myth our fears about nuclear energy and nuclear weapons. The story is more than seven decades long and much might be before the reader’s time. The book tells the stories of those involved in the study of sub atomic nuclear particles, which lead to the making of the Atom bomb. Here one will find the tales of those involve, including Marie Curie, Leo Szilard, Enrico Fermi, J. Robert Oppenheimer, Edward Teller, Albert Einstein, and others. This is a long history with suspense and historical corrections. The subject is one of the most important in elements of recent history.

“Imagine our atomic arsenals, glowing and unused, not poised for Armageddon, but instead the warm, nucleic source of global peace.”

Nelson takes a positive view of nuclear energy and weapons, arguing that MAD (Mutually Assured Destruction) has led to détente between super powers, radiation has been less dangerous and carcinogenic then thought, and nuclear energy is a cleaner source of energy than coal and gasoline. He argues against the notion that nuclear weapons are different than others in the process failing to fully acknowledge that they really have the ability to destroy civilization as we know it a lot easier than what became before. His optimism fails to win out in this telling.