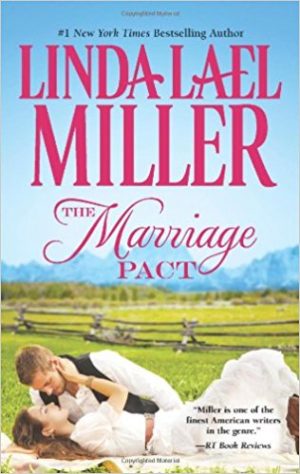 Hadleigh Stevens was all fired up to marry an unsuitable man when Tripp Galloway barged into her wedding and carried her off, revealing the truth about her cheating fiancé and his illegitimate children. As if things couldn’t get worse, Tripp broke Hadleigh’s young heart by admitting to a wife of his own in California. After ten years spent trying to forget Tripp, Hadleigh’s small world is rocked by his return to Mustang Creek. Though she denies any lingering feelings for her first (and only) love, not even Hadleigh can resist the masculine appeal of the repentant and determined Tripp Galloway.

Hadleigh and Tripp fell in love when they were children, and then spent decades trying to deny it. The Marriage Pact’s only source of conflict is their stubborn refusal to move on from the past and admit their love to each other, but one kiss changes Hadleigh’s mind and has Tripp seeing visions of babies and growing old in rocking chairs. Although the plot is flimsy, The Marriage Pact is an atmospheric and fun contemporary Western romance. The central and secondary characters (including two lovable dogs) are delightful, and should prompt readers to continue with Linda Lael Miller’s new Brides of Bliss County trilogy.