Tibetan Peach Pie: A True Account of an Imaginative Life by Tom Robbins 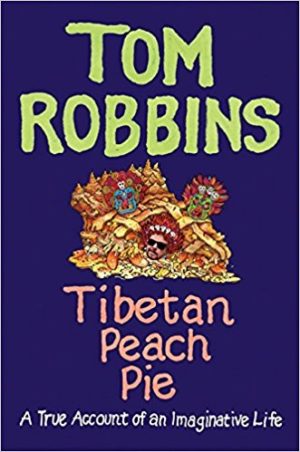 This is the life story of renowned, prize-winning novelist Tom Robbins. But, he says, it is neither autobiography nor memoir. It isn’t about Tibet or peach pie either. It’s the true account of an imaginative life (to borrow from the subtitle), written as only Robbins writes. Funny!

Robbins says, “Whatever it may reveal about me and my personal ‘monkey dance of life,’ including how I emerged from a Southern Baptist milieu to write nine offbeat yet popular novels published in more than twenty countries, as well as innumerable pieces for magazines and newspapers, this book also provides (perhaps more importantly) intimate verbal snapshots of, among other settings, Appalachia during the Great Depression, the West Coast during the sixties psychedelic revolution, the studios and bedrooms of bohemian America before technology voted privacy out of office, Timbuktu before Islamic fanatics crashed the party, international roving before ‘homeland security’ threw a wet blanket over travel, and New York publishing before electrons intervened on behalf of the trees.” Tibetan Peach Pie chronicles Robbins’ life around writing his nine novels and more, traveling all over the world. Fans of Tom Robbins, the person, the novelist, the introspective jokester and the gifted storyteller, will love this book. It truly is a gem.