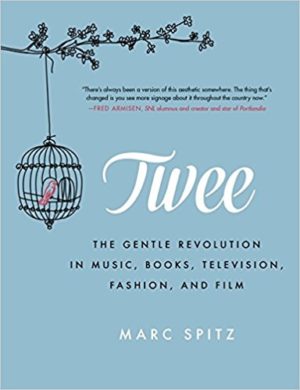 Spitz’s book is a comprehensive history of the twee aesthetic in a variety of contexts. He traces twee as a movement to a variety of authors, movie makers, and popular music musicians. The author is well-versed in many mediums, and at times the endless references to relatively obscure figures is a bit mind-boggling. Toward the end of the book, Spitz becomes virtually a defender of the faith, finding hope in the gentleness and innocence of twee as a sort of herald for a new set of social attitudes.

I found myself having difficulty contemplating the twee aesthetic conquering our social world at a time when large parts of the world are literally under military siege. Another difficulty of the book, and this sub-culture, is that it seems to be virtually irrelevant to the lives of the average working person, and even less so for members of the variety of ethnic groups that make up the population of the United States. As such, there’s far more coverage of homosexual and transgender people than of African-Americans or Spanish-speaking individuals. When the author turns to social history, it seems he might have grown up without any awareness of the Civil Rights movement. Although a number of the books and television shows referenced are of some import, the truth is that the mass market for “blockbusters” in the entertainment world is more fixated on shows that focus on crime and violence than the current sitcoms or even sketch comedy like Portlandia.

If you want to know about the history and development of twee, this book offers many thought-provoking insights. Readers can decide for themselves whether the author’s focus is a bit overdrawn in the context of current events.