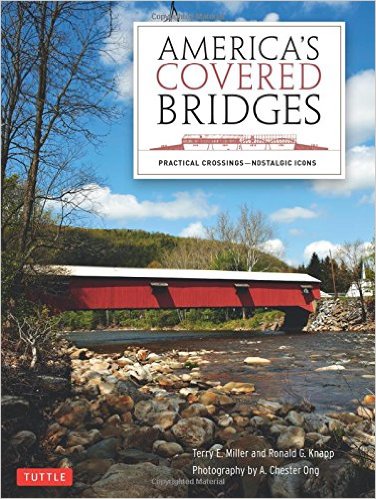 The fascination with covered bridges is akin to the fascination with early trains. These subjects are both historically significant and slowly disappearing. Many of our covered bridges are still in use and being preserved or resurrected. Terry Miller and Ronald Knapp combine their enthusiasm with photographer Chester Ong in America’s Covered Bridges, a large-format, beautifully produced book with some 550 photographs, historic illustrations, sketches, drawings, and paintings. The first half of the book is detailed text and illustrations on every aspect of covered bridges: historic perspectives, their evolution, the physical construction, their future, and their preservation. The discussion includes details such as eighteen kinds of trusses in use in various covered bridges.

“Most covered bridges are well over a hundred years old, some up to 150 years, and fewer and fewer of them are up to carrying normal traffic.”

In the second half of the book the authors present some fifty-five covered bridges, devoting two to three pages and three to five illustrations for each in five broad regions in the US and in Canada as a whole. Their text is easy to read but quite detailed for the average reader. Most of the covered bridges are on the East Coast and in the Midwest, with a smaller number on the West Coast. This book is primarily of historical interest, but covered bridge buffs will appreciate a volume on their coffee tables.