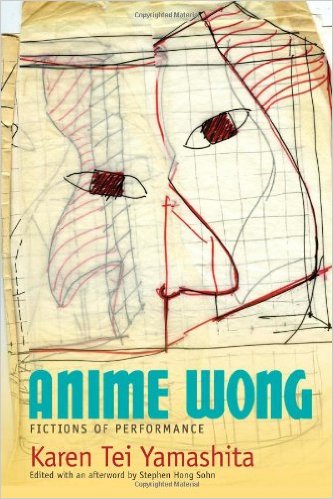 Anime Wong: Fictions of Performance is a collection of performance work by Karen Tei Yamashita (Over the Arc of the Rainbow, I Hotel), edited by Stephen Hong Sohn. The pieces span decades – some were performed for the East-West players of LA in the ’80s and ’90s, but the titular piece and two others written in the 21st century are as yet unperformed. She says she isn’t seeking to have them staged per se, “only perhaps imagined.”

The experimentation of the performances is enough to read for, but they are enriched by the subjects at hand. “Hannah Butoh,” is a play with each act organized around a sensory experience; it mixes genre and media and perspective, interrogating stereotypes of Japanese or Japanese-American women. Yamashita calls “Hannah Butoh” and her other works of the time “flexible rites” for those who performed them, those she wrote them for. Racism and stereotypes are also flexible and morph, thus her continued creations on the identity and responsibility of Asian Americans in a changing world.

We as readers of Anime Wong can become the performers, and the plays we stage in imagination are our “flexible rites.”