Glimpses of Phoenix: The Desert Metropolis in Written and Visual Media by David William Foster 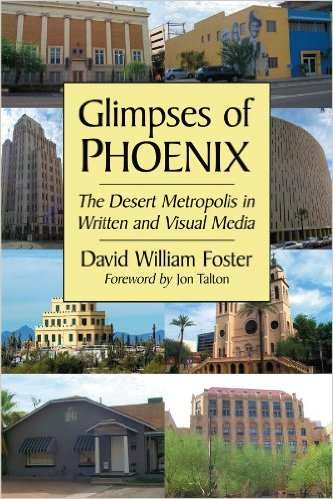 One author labeled Phoenix as the “worlds’ least sustainable city.” This huge city (4.4 million) is artificially maintained in the desert. D. W. Foster’s book Glimpses of Phoenix includes nine chapters from nine different authors, each with something to say about the city. Two shorter essays in the appendix and a long one in the preface complete this volume. Every chapter is wordy – almost entirely text with surprisingly few photo illustrations. Readers would be right to expect plenty of photos, but they would be disappointed.

“…this book represents the first attempt to suggest a cultural history for Phoenix.”

This book reads like the result of thorough research on the city – its history, but mostly its present – to be archived for future reference. It is more like a scholarly study with numerous chapter-by-chapter references and, unfortunately, a poor, very short index that lists only names. If you are interested in this fascinating, artificial city, you would be quickly bored by dry text after dry text. This book is likely to be in library reference collections.