Mercenaries: Putting the World to Rights with Hired Guns by Al J. Venter 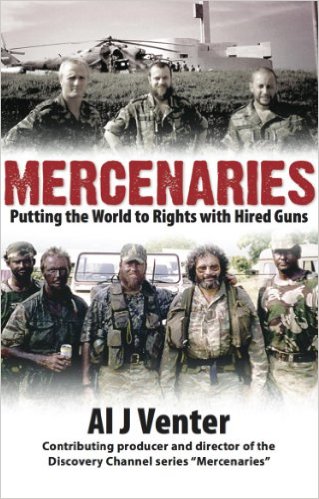 Mercenaries are employed in a variety of specific situations: when politicians are hesitant to commit troops; when a small, specialized, well-motivated force would be more effective than regular military forces; or when small conflicts in the Third World require military force that First World countries won’t send. While there is an almost universal distaste toward freelancers doing the work of professional soldiers, the privatization of war in Third World countries often makes freelance military alternatives the best option.

“War is being privatized.”

Mercenaries: Putting the World to Rights with Hired Guns is written by Al J. Venter, an author who has spent his professional career covering some of the most dangerous conflicts and insurrections of recent years. The author draws from his impressive experience to examine the mercenary world in the context of these conflicts and the use of hired guns, especially in the case of Africa. Mercenaries is a technical piece that assumes readers are already knowledgeable on the subjects of politics and military actions in the last fifty years. It might be a little heavy and over-specific for the casual reader, but it should please nonfiction readers who enjoy in-depth military works. The tone favors facts over humor, but as a whole it seems very well-researched and methodically executed.