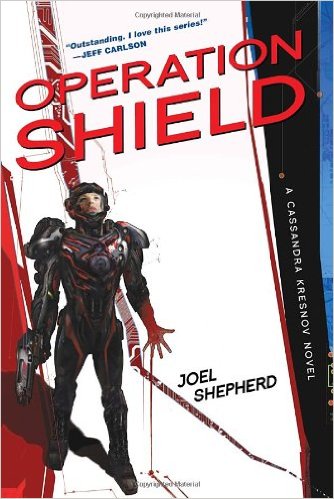 The fifth book in the “Cassandra Kresnov” series, Operation Shield starts off quickly and rarely slows down long enough for readers to catch a breath. After discovering the true origin of the technology used to create the GIs, Sandy returns to Tanusha to find that politics are about to turn deadly. The Grand Council has split in two, half of the members demanding peace with the League no matter what the long-term costs may be. In the name of peace, a civil war begins between the various branches of the Tanushan government. When the bullets start to fly, Sandy must try to take down the usurpers and protect her people at the same time, including the three children she has so recently adopted.

“She stood now before the nine photographs of the CSA’s fallen, and knew that this was what the League has stolen from her and her kind. Dignity. Meaning. Choice. These men and women had made a choice to be here, and in dying here, gained dignity. Their deaths had meaning, because they’d known for what they risked and fought. If she stood for anything, and fought for anything, it was this, signified by these slowly growing shrines against the morgue wall, and the two SWAT troopers at hard attention, weapons angled sharply at the ceiling.”

Joel Shepherd has once again managed to create a fast-paced page-turner of a novel. As usual, things are more complicated than they first seem, and Sandy fluctuates between high-octane combat mode and eloquent diplomat. This book is definitely not the place to start for readers new to the “Cassandra Kresnov” series, as so much is tied into knowledge of the previous titles. A fantastic continuation of technology-heavy science fiction with a touch of cyberpunk, fans of Shepherd’s previous work will love the new installment of this amazing series.