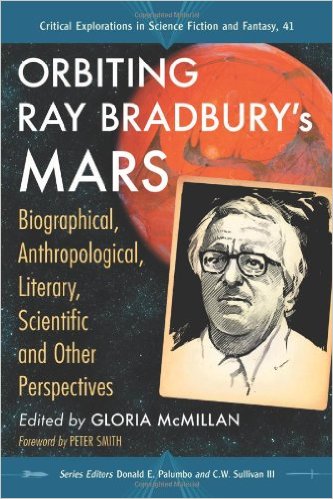 Ray Bradbury is one the great science fiction authors of the mid-to-late twentieth century. He was known for his world-exploring epics and slim classics. One short story series, usually collected into novel form, is The Martian Chronicles: vignettes about human missions to attempt to colonize Mars with varying degrees of success which also function as social commentary. Many of his stories reflect the establishment of colonies by the major European powers and those colonies’ effect on local populations, while others deal with Cold War tensions.

This work brings together a wide variety of contributors to examine The Martian Chronicles in more detail. Its rich tapestry of images, locations, and themes is further analyzed. The book is split up into many sections, with each section taking on a different theme. Along the way we get to see this work from many different angles and explore how living in Arizona affected Bradbury’s worldview.

The book is a lot like other anthologies: some of the essays are good, and a few are not so good. Overall, this is a worthwhile collection and it will be useful to students of mid-twentieth-century American literature.