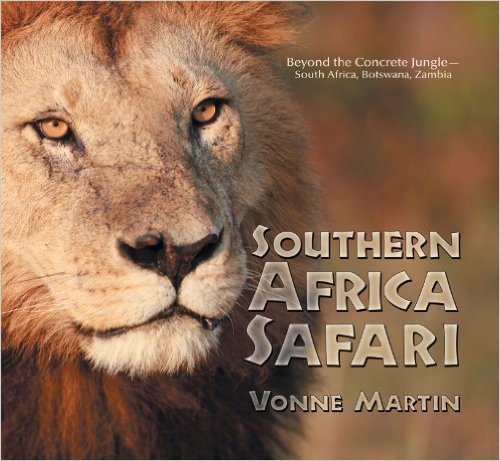 Imagine going on a safari vacation with the intent to produce a book, and then actually seeing the project through! Vonne Martin, a longtime underwater photographer, has turned her skill to the animals and birds of Southeast Africa. The pages are crowded with shots of elephants, rhinos, giraffes, and antelopes, differentiated by the size and shape of their horns, and numerous other species of wildlife familiar to anyone who enjoys zoos or David Attenborough’s television series. While most pictures resemble their counterparts in similar books, Martin has captured several unique images of individual animals and groups. Outstanding among these are shots of clusters of zebra, spotted hyenas, and wild African dogs smiling like Little Red Riding Hood’s wolf, and remarkable images of a Cape buffalo and a hippo looming close-up and in-your-face.

It demands courage, even with the distance allowed by a telescopic lens, to draw the attention of these malevolent, supercilious, bored, menacing, and occasionally endearing creatures. The pages follow each other in a creative rather than arbitrary manner, and an informative text complements the illustrations. The book offers two bonuses: a DVD of the safari and several pages featuring the places and people visited.