The Leopard by K.V. Johansen 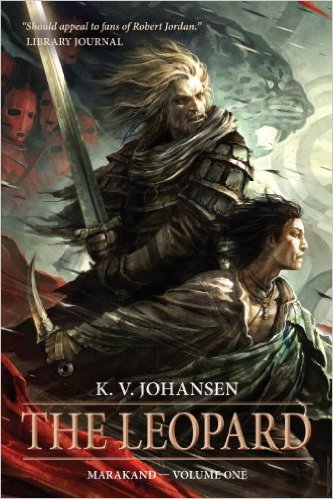 The assassin Ahjvar, also known as the Leopard, has been cursed with an inability to die. Cranky and hiding out in a remote costal village with the enigmatic runaway slave Ghu, Ahjvar is called into the service of Catairanach, the very god who cursed him so long ago. The Lady of Marakand, a bustling trade city to the south, has launched a war for unknown reasons resulting in the slaughter of Catairanach’s people. With the promise of removing his curse, Ahjvar and Ghu head south, unaware of the danger awaiting them.

The Leopard begins strong, introducing three complex characters with violent and dynamic pasts. However, just as readers may think they’re about to find out what makes Ahjvar, Ghu, and Deyandara tick, they completely disappear from the narrative and are replaced by a new set of characters. Unfortunately, these new characters are developed only superficially, making it exceptionally difficult to care much about their predicament. The Leopard is a book with large groups of gods, demons, legends, magic, and plenty of violence for readers who enjoy detailed fantasy worlds, but be prepared for the abrupt shift in cast halfway through the book.