The Lost by Sarah Beth Durst 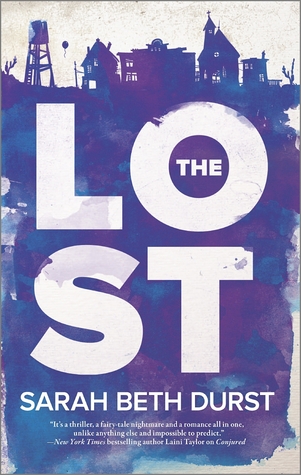 Lauren Chase, whose mother is diagnosed with a terminal illness, is supposed to turn left, but she goes straight instead. She continues until she is confronted with a sign welcoming her to the town of Lost, which is the place where all things lost – bicycle tires, lunch boxes, boats, even people – end up. Seeking to escape the void surrounding lost after fleeing angry townspeople, she is rescued by The Finder, and is befriended by a six-year-old girl with a teddy bear in one hand, and a knife in the other. Between The Finder and The Missing Man, can she find her way back to her mother’s bedside? Her journey reveals that perhaps Lost, and the mysterious void pushing in at its borders, has bigger plans for her.

The Lost is Durst’s first foray from the YA genre, for which she’s well known, into adult literary urban fantasy, though from time to time she shows her YA hand. The novel leaves so many questions unanswered, which is lucky, since it’s the first installment in a trilogy about this mysterious and exciting world.