The Oregon Shanghaiers: Columbia River Crimping from Astoria to Portland by Barney Blalock 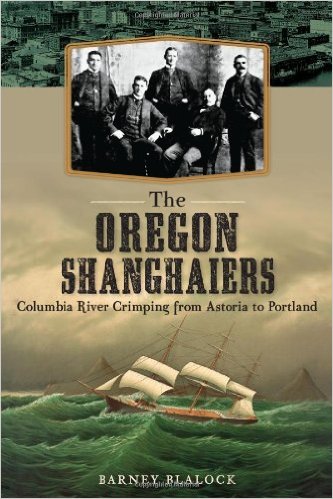 Oregon has a long history of being the home for shanghaiing sailors and sending them on boats that they did not want to be on. A lot of the stories are myths, including the myth that such practices continued until the 1940s. Separating myth from reality is not an easy process for something like this; it is hard to correct people’s minds about something so potentially interesting and controversial.

In this short work Barney Blalock goes for the truth about this practice by focusing on the main, and most notorious, people involved in the Portland and Astoria area. Blalock looks at a few families, where they came from, how they got their start, and how they were able to do what they did. In reality families were able to continue shanghaiing because of early Portland’s Wild West nature and the lack of law enforcement relating to sailors and boats. But the family histories are extremely interesting.

Blalock does a good job bringing this seedy underworld to life with its cast of interesting characters. Not overly academic, this book can be enjoyed by the average reader, and maybe it will help put to rest some of the myths about Pacific Northwest shanghaiing.