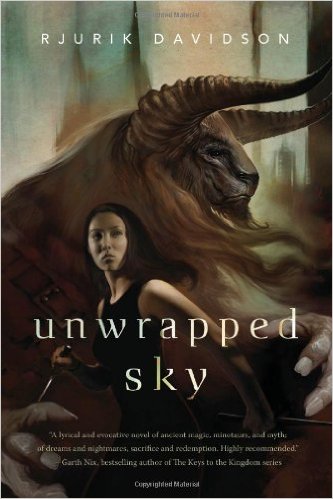 The ancient city of Caeli-Amur is at war with itself. On one side are the ruling houses, the powers in the city that control the day-to-day lives of its citizens, as well as secretly maintaining the delicate peace between Caeli-Amur and the powerful empire of Varenis. On the other side are the seditionists, the subversive voice of the citizens who have grown tired of the cruel and abusive rule of the houses. In between balances a third faction: those traditionally under the control of the houses, but who also grow weary of the status quo. Revolution burns in the back of everyone’s minds, but will such a change free Caeli-Amur, or destroy it?

First of all, this book will take you a while to get through, no matter how fast a reader you are. For people interested in a quick read, look elsewhere. Unwrapped Sky is truly designed for someone interested in completely immersing themselves in the story’s complicated world, and who is willing to take their time. Another warning: this book, despite what the official summary and the cover of the book would have you believe, is NOT about Minotaurs. If you start reading the book expecting it to be about Minotaurs, you will be severely disappointed. While there are Minotaur characters in this book, they feature in the story only as a side plot that disappears early on in the book.

Unwrapped Sky follows three characters, one from each of the three factions so important to the politics of the novel. These are complicated characters, and none of them is truly good or evil, which makes them incredibly believable. The story itself is complicated, and deeply rooted in the politics, history, and mythology of the world. Many of the ideas introduced in the book are not resolved at the end, and judging from the book’s marketing it appears that it could be the beginning of a long-running fantasy series. Unwrapped Sky is a good pick for fantasy buffs who enjoy a meatier read, and a novel that wrestles with concepts of power, social injustice, fate, and discovering the consequences of doing the right thing.