An Uncanny Era: Conversations between Václav Havel and Adam Michnik edited and translated by Elzbieta Matynia 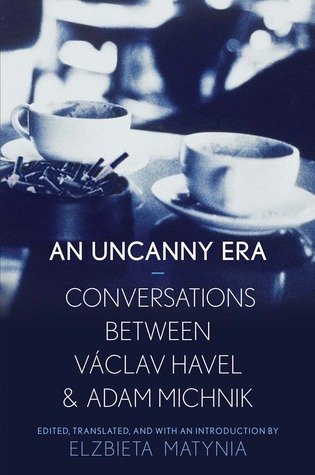 Václav Havel and Adam Michnik were two major figures of late 20th century history of Eastern Europe. They were dissidents fighting the overthrow of communism in their respective countries, Poland and Czechoslovakia. Each of them played a part, though different from each other. Michnik was more of a news reporter, and Havel was a playwright and author. Each brought their own style to the fight. They met in 1978 in the mountains on the border between their two countries and forged a life long friendship. This book catalogs their conversations after this and how they dealt with the fall of communism and then the aftermath. They were giants of their times and they lived through tremendous change.

This book is perfect for students interested in the history of the end of the Cold War because it provides a first person perspective for those that lived through it. Most of the book is made of interview transcripts between the two of them. The transcripts are bookended by two essays; one written by Havel and the other written by Michnik.