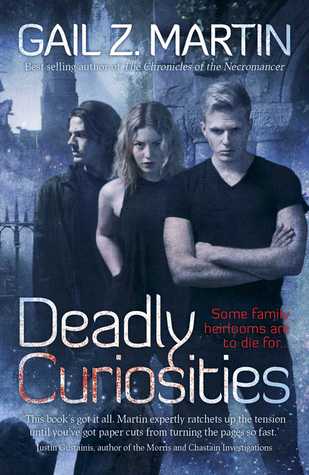 Cassidy Kincaide recently inherited Trifles and Folly – a charming antique store located in Charleston, South Carolina – and runs it with her assistant manager and best friend Teag Logan. She also inherited her uncle’s psychic gift for being able to see the history of any item she touches, a useful gift for Trifles and Folly’s other business – acquiring dangerous supernatural items and destroying or neutralizing them before innocent people get hurt. When horribly mauled bodies start turning up around the Navy Yard, and previously harmless antiques start manifesting disturbing and violent hauntings, Cassidy calls in her business partner Sorren, a vampire who has partnered with her family since Trifles and Folly opened in 1670. A foe long thought dead has resurfaced, and it’s a race for Cassidy, Sorren, and Teag to figure out what his plans are while the body count rises.

“Bo’s ghostly form appeared before me, snarling and snapping like an insane guard dog. But Jeremiah wasn’t afraid of ghost dogs, and his darkness slammed Bo’s spirit out of the way.”

Deadly Curiosities is a fun urban fantasy with a bit of southern charm. There were plenty of good ideas in the story, but the follow-through was shoddy in places. The story was engaging enough, and its rising cost and danger kept me turning the pages despite some problems in other areas. The magic and inherent abilities in the book were all over the place; there didn’t seem to be a particular defined ability set, and whenever the plot required the characters to do something different with their power they suddenly could, with no explanation as to why. These convenient “level ups” can be distracting and test the reader’s suspension of disbelief. The characters also suffered a bit in their believability, Teag in particular due to his supposed master martial arts abilities that he seemed to forget he even had on occasion. This left him as vulnerable as Cassidy (before and after several different upgrades to her skill set) and running for the hills in several scenes, but then suddenly turning into a kung fu master in others, even against the same type of foe. The book also repeated itself, reiterating facts that had previously been presented to the audience several chapters earlier, which some readers might find annoying.

Despite these problems, Deadly Curiosities is worth a read for urban fantasy buffs, but maybe not a permanent place on the shelf.