Degrees of Inequality: How the Politics of Higher Education Sabotaged the American Dream by Suzanne Mettler 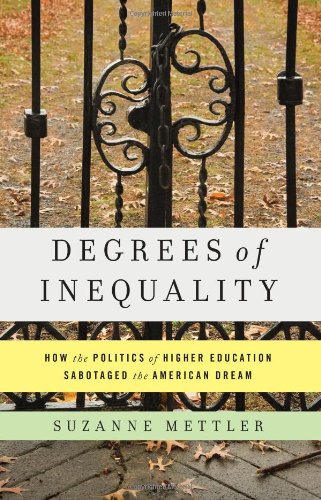 Suzanne Mettler’s study is an attack on the current state of the American system of higher education, and she attacks on two fronts. On the first front, she is critical of the effect that tax cuts and increasing tuition costs are having on lower- and middle-class Americans, particularly at large, influential, flagship public universities. If higher education is meant to be the great socioeconomic playing field leveler – and data suggests that most Americans believe that it should be – then these trends can be seen as failing that mission, as education costs are widening the opportunities between rich and poor. However, Mettler has firmly set her sights on the injustice, greed, and exploitation of the largest of the for-profit universities in the US.  They receive 80% of their funding through government subsidies such as the GI Bill and Pell grants, but they have poor graduation rates, and those who do graduate find that all that is waiting for them are poor employment prospects and high loan deferment rates.

Mettler’s careful analysis should give anyone pause, as the trend is set to exacerbate the inequality between rich and poor in this country, made worse by the close relationship between business leaders and political leaders in the US.