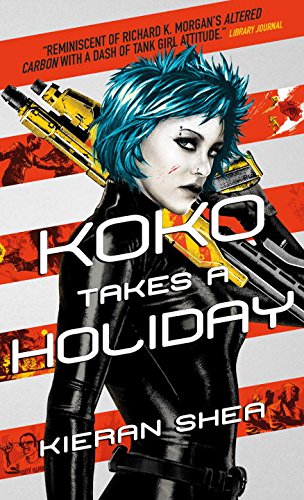 Five hundred years into the future the prime vacationing spot is The Sixty Islands, a high class resort where the wealthy go to live out fantasies of sex or violence. Retired corporate mercenary Koko Martstellar is busy enjoying the high life as a bar and brothel owner when the violence suddenly becomes personal. Fleeing The Sixty Islands with bounty hunters hot in pursuit, Koko tries to lie low in the Second Free Zone. Unfortunately after a close encounter in a dirty alleyway Koko realizes hiding is not an option. She reluctantly joins forces with Jedidiah Flynn, a retired cop who is suffering from the terminal disease Depressus, in an effort to thwart the bounty hunters and figure out why her old friend is trying to have her killed.

“SigSauer.
Five hundred years of worldwide collapse and chaos – bet those lederhosen-sporting artifacts had no idea their little wagon factory would still be around, kicking so much ass. Chocolate and guns, those Swiss sons of bitches truly knew their way to a girl’s heart.”

Koko Takes a Holiday is an incredibly fast paced, zany rollercoaster of a ride. The story takes place in a cyberpunk future world that is still incredibly familiar, and the action is paced in such a way to keep the pages turning. Koko is a fascinating character, who is much deeper than she first appears, and Flynn is a great, if at first reluctant, partner in crime. Kieran Shea even managed to make the antagonist sympathetic despite keeping both the audience and the character herself in the dark about her motives until the very end. A quirky, gritty, humorous, and incredibly visual stylized book that would be perfectly at home in graphic novel or movie formats, Koko Takes a Holiday is an absolutely amazing debut.