Letters of the West: An ABC Book of the Many Plants, Animals, and Other Curious Features of the West by Michelle E. Walch and John Maddin 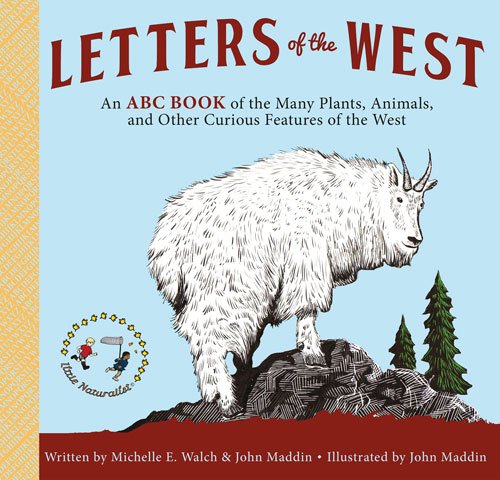 Last year, Portland publisher Craigmore Creations put out the first book in their Little Naturalist series, Flowers by Number. They have just published two more titles in the series, Letters of the West: An ABC BOOK of the Many Plants, Animals, and Other Curious Features of the West, and Tracks Count: A Guide to Counting Animal Prints. In Letters of the West, Michelle E. Walch and John Maddin – a husband and wife team – combine simple yet interesting information about natural history with pleasantly bold illustrations. From the light of Alpenglow to wading Herons, and hoarding Squirrels to Zigzag, Oregon, the flora and fauna of the west coast are captured in this splendid book.

While the entries broadly cover the west coast, readers in the Pacific Northwest will relate to Beaver, Spotted Owl, Trillium, and Waterfall. As a nice touch they have included the scientific Latin name for plants and animals that are featured. Books about science and nature that share concise information with visually appealing artwork can light the flame of curiosity in the minds of young readers. May the Little Naturalist series and Letters of the West do just that, while helping preschoolers learn their alphabet.