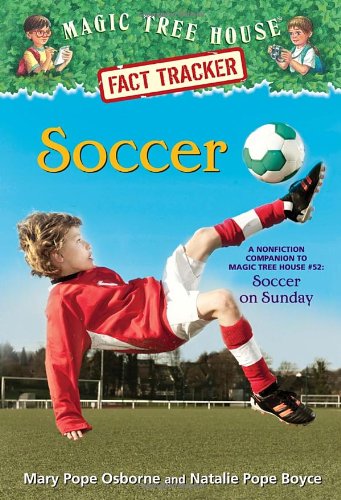 Many of the widely popular books in The Magic Tree House series for older, elementary-aged children have a nonfiction companion book that delves into the facts behind the story. For the recent Soccer on Sunday, in which globe-trotting and time-traveling siblings Jack and Annie find themselves in the audience for the 1970 Brazil v. Italy World Cup game in Mexico City, series author Mary Pope Osborne and her sister Natalie Pope Boyce highlight the history of soccer, the rules of the game, various soccer personalities, and the role that soccer has played in cultures across the globe. While soccer as we know it today originated in England and Scotland hundreds of years ago, similar ball games are known from civilizations thousands of years ago. Starting in 1921, women’s soccer was banned for about 50 years in England because the sport was deemed not safe for women. The World Cup was begun because it would bring more peace and unity between countries of the world. These are many of the facts one will learn about soccer. Soccer, the 29th Fact Tracker in the Magic Tree House series, serves as a great way to give a young, aspiring soccer player a well-rounded knowledge of the sport they love.