Maintenant 8: A Journal of Contemporary Dada Writing and Art edited by Peter Carlaftes and Kat Georges 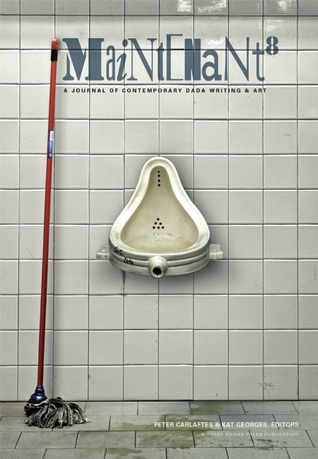 Maintenant 8 is the seventh annual edition of Dada-inspired writing and art published by Three Rooms Press. The theme of the issue is “It Won’t Belong.” Dada was an early 20th century art, or rather, anti-art movement during and after the First World War. It aimed to disrupt traditional values and mores by emphasizing fragmentation and chance, using techniques such as collage, photo-montage, and automatic writing.

“How you plan to kill time means nothing to me as your troops invade my body. Outside, the city falls to its knees, I hold it crying in my arms as I fall…in love with strangers. Come, my friend, let us crucify the hour.”

The variety of pieces in Maintenant 8 from international contributors make use of these same techniques. Avelino De Araujo’s “Libelo No 19.” Jean Jacques Lebel’s “Blast For Burroughs,” and Peter Carlaftes “Collected Thoughts” are excellent examples of collage and montage techniques. There are some interesting visual poems as well, such as Volodymyr Bilyk’s “Bocasa-Cabasa,” Joel Allegretti’s “Concrete Poem” and Bibiana Padilla Maltos’ blackout poem “How The Night Gets Divided #83.” There are also several pieces about Dadaism itself and Dada artists, such as A.D. Winans’ “Poem For Ruth Weiss,” Gerard Malanga’s “Barbara Rubin” and “Rene Ricard,” and a section from Jerome Rothenberg’s “That Dada Strain.”

There are a lot of great pieces in this journal, but on the whole it was a bit underwhelming. It wasn’t as artistically experimental or politically radical as it could have been. In fact, there were few socially or politically engaging pieces; most of them were simply “interesting.” They captured the techniques of Dada, but not the spirit.