Producing Country: The Inside Story of the Great Recordings by Michael Jarrett 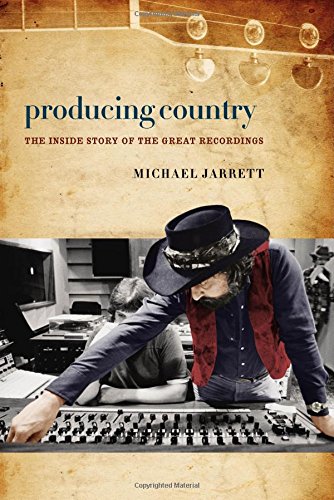 Jarrett has interviewed a cross section of country music producers. The interviews are relatively short and focus on specific albums or songs. The interested reader can grasp the various styles of production and how they have evolved over the years. A record producer is often compared with the director of a movie and is involved in making similar sorts of decisions. These include selecting songs, having a voice in the musical arrangements of a song, and mixing the song from its form as a multi-track recording to the final product heard by a general audience. As the interviews unfold, the reader grasps that there are many different styles of production. Some producers are control freaks who dominate the proceedings, while others simply let the musicians go where they choose to go, and then make an occasional suggestion that amounts to editing. The producer must also relate both to the artist and the record company that ultimately issues the recording.

As Jarrett speaks with various producers, the reader gets a definite sense of just how important the musicians are in the production process in Nashville. The rhythm tracks are cut without written music, using the famous Nashville number system; each chord has a number in the key in which the song will be performed. Some producers are also musicians and songwriters, so they have been involved in virtually every aspect of record making. Even in today’s music market, Nashville is generally regarded as songwriting headquarters because so many artists record songs that are written not by themselves, but by professional songwriters.

The producers profiled include celebrities such as Allen Reynolds, Garth Brooks’ producer, and other producers who have worked with the Dixie Chicks, Elvis Presley, Reba McEntire, and other well-known artists. The book might have benefited from a few more detailed interviews with some of the more articulate producers, particularly with regard to how they proceeded when problems arose in a project between artists, record company officials, or musicians. Overall this is a well-written guide to the way records have been made in Nashville, from around 1945 to the present day.